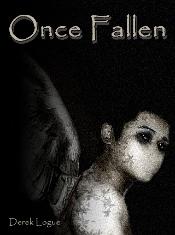 Once Fallen has decided that because the book was actually written in 2007 and released in 2009, most of the information is now outdated. (With sex offense laws changing so much, any book covering this subject tends to be outdated within just a couple of years.) I have offered the book free for years now; iif nothing else, it offers a glimpse into the laws as they were developing between 2007-2009.

Please respect my copyright, however, and do not reuse it for commercial purposes (i.e., selling on your site or republishing on your site) without my consent.

The Book Description as written for Amazon.com: (Note: I removed the eBook from Amazon due to the release of “Your Life on The List”, the registry survival guide released in 2020. The free PDF version is still available here on this page.

Once Fallen is a two part book giving both an eyewitness account and expert testimony of the negative consequences of the current direction of sex offense legislation. Current sex offense laws focus on retribution against Former Sex Offenders while neglecting the rehabilitation of registrants, and completely ignoring tried-and-true prevention and education measures that would greatly reduce criminal sexual behavior. Current sex offender legislation create barriers to the successful reintegration of individuals who have served out their sentences. In addition, these laws help propagate the myriad of myths and lies we believe about sex crimes and those who commit them.

Once Fallen follows the seven year journey of one man to overcome his past and live as a productive member of society. The law, an unforgiving society, and internal struggles stand in the way of a reformed life. The first half of this book chronicles this man’s struggle for forgiveness in a society, overcoming insurmountable odds to atone for the sins of the past while offering hope for those facing similar personal mistakes.

The Second part of Once Fallen is the fruit of nearly a decade of research on the impact of sex offender laws. Sex offender legislation is very popular, yet have come with disastrous consequences for both the registrants living under the laws and the society that desires them. The laws have been proven largely ineffective while merely reinforcing stereotypes and myths about sex offenders. Vigilantism, social ostracism, and denial of basic needs are just a few of the negative consequences of the laws on the individual registrant. Such negative consequence give ample incentive to disobey these laws, as they ultimately punish mostly those who are rehabilitated and have no desire to recidivate.

The social consequences of these laws include failing to address the greater number of sex crimes which are committed by non-registrants, the dilution of the registries as a result of predator panic, and the perpetuating of a fear-based culture. This fear has led to hypersensitivity to sex crimes to the point laws intended for the “worst of the worst” are used against even non-sex crimes or behaviors once merely frowned upon, such as consensual teen sex. We have given up large amounts of personal and constitutional freedoms, and laws created against sex offenders are expanding into other criminal behavior, with the potential risk of punishing people based upon perceived risk alone.

Once Fallen gives you the truth behind the sex offender legislation and industry, giving you the facts you may not want to hear, but NEED to hear. As with many social panics in our society, there is money to be made in the sex offender industry, with billions of dollars at stake, leaving no desire from mass media, celebrity advocates, and legislators to tell the public the truth behind this ill-fated legislation.

Once Fallen offers a rational solution to a problem riddled with well-intentioned but failed legislation. The solution requires we think outside the box and approach the subject with an open mind.