Video: The 2009 show, released in March 2010, was the first time the idea of the Shiitake Awards show was filmed and placed on
Youtube as was intended. The complete voting records for the 2009 Awards was but the winners were announced on the 2009
Youtube Video. This video was intended to be a parody of other popular awards shows, complete with opening jokes and parody
songs written to make light of the nominees and “winners” of the awards. The video was filmed in my apartment in Sheffield AL,
and my girlfriend at the time helped me make the video and helped on a couple of songs.

Changes from the 2008 Awards: The 2008 Awards only had seven categories. The 2009 edition added a new catch-all category, the
“Holy Shiitakes Award.” This category was created to added silly stories that could not easily be categorized elsewhere but worthy of
mention. In the 2008 Awards, there was no limit to the time frame for a Shiitake-worthy event, while 2009 awards (and every
subsequent year) imposed a limit to just events from the year covered by the awards show. This year was when the awards show
really started to take shape. 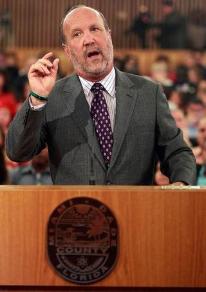 WINNER: Ron Book, Florida Lobbyist:
Background: Notorious for his role in forcing registered
citizens to live under the Julia Tuttle Bridge in Miami.
By 2009, the bridge had gained international notoriety
as well as the disdain and hatred from registry
reformists. Not much has changed in Miami since this
award was given, either. 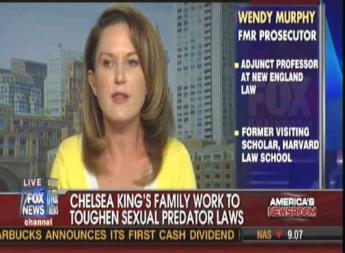 Background: The woman most known for her infamous statement of
having “never met a false rape claim, my statistics speak to the truth”
wrote a puff piece attacking an article in The Economist that questioned
sex offender registries; Murphy claimed registries are not connected to
vigilante violence against people listed on the registry or the fact
registries lead to unemployment. She also claims the reason recidivism
rates are low is because of underreporting, suggesting nearly all
underreporting is because of repeat offenses. “Even more arrogantly,
Harlem dismisses people who claim that 75-90 percent of sex offenders
re-offend, claiming, ‘it is not clear where they find such numbers.’ Too
bad Harlem couldn’t locate the wealth of research on recidivism laid out
in Dr. Anna Salter’s prize-winning work in which she cites studies
finding that the average sex offender assaults more than 100 different
victims during a lifetime.” 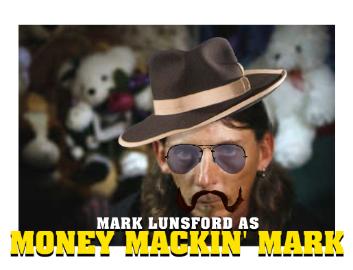 Background: Lunsford abused his position as a friend to John Walsh
when his own son faced a child molestation charge. From the RSOL
#19 March Digest of March 2009—“This gave me the opportunity to
approach Mark Lunsford. Explaining that my husband was on the
registry for life for consensual sex as a teen. An ‘offense’ similar to
the ‘offense’ his son would have faced if it were not for his
intervention. Mr. Lunsford said that his son served ten days, on a plea
to a felony offense. He said that he told the prosecuting attorney that
he would ‘expose every sex offense case where they gave a lenient
sentence to a true sex offender if they treated his son like one of
those predators’. Thus, his son avoided registration.” 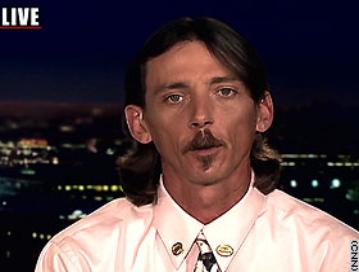 Background: Lunsford became the first Shiitake Award nominee to
win more than one award, and he managed to do it in the same
award show. In 2008, he had a feud with Bubba the Love Sponge of
all people, who accused him of mismanaging funds. His son was
arrested for a sex crime, but Lunsford used his fame as a weapon to
get his son off the registry. But 2009 arrived with an expose into
Mark Lunsford’s dubious nonprofit, and reported that Lunsford
misused roughly $400k from his nonprofit. He spent thousands on a
hotel room he destroyed during a fight with a girlfriend. He was
investigated by the IRS. It came out he told a coworker “Fuck the
IRS, I’m Mark Lunsford.” Lunsford hocked failed tracking
software. Lunsford began working for drug smuggler-turned-data
miner Hank Asher. With all the controversies surrounding Lunsford,
combined with a growing mistrust of Lunsford by other victim
advocates, it is no surprise Lunsford was voted Hardest Fall. 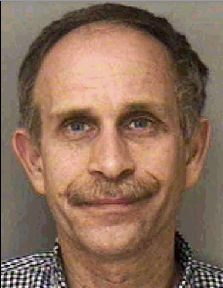 Background: Owner and operator of Adjustment &
Awareness (a counseling program), Sandman tried to
extort $2500 from a registered citizen under the guise
of helping the registrant “graduate” his program. 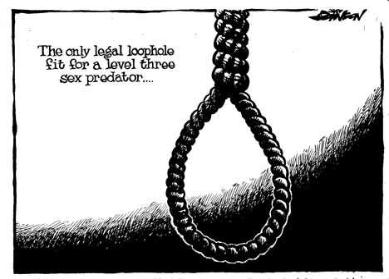 Background: Johnson drew a political cartoon featured in a
number of papers in the Pacific Northwest, most notably the
Kirkland Reporter (WA); the cartoon was of a noose with the
tagline, “The only legal loophole for level 3 sexual predators.”
It drew outrage from numerous anti-registry activists; An
official for the Sex Offenders Solutions and Education
Network (SOSEN) responded with statistics: the truly
dangerous offenders make up less than 5 percent of the total
number on the national registry, according to the Department
of Justice; and the No. 1 cause of unnatural death among
former offenders is vigilantism. The cartoonist’s response
was, “All in all, I consider any opinion piece a success when it
heightens the awareness of issues in our collective community.
Right and/or wrong is not my aim. Getting people to discuss
the issues that impact their community is. Mission
accomplished.” 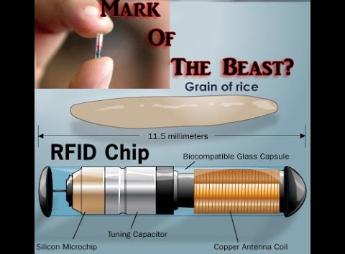 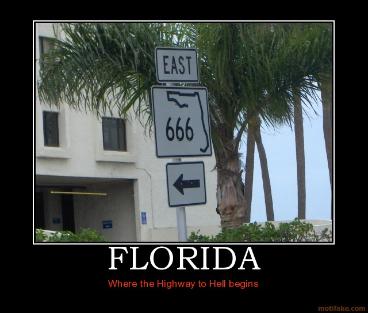 2009 Worst State in America (aka the “ICBS
National CHUMPionship”) Award

Background: As stated by a commenter on the
Shiitake Awards blog: “Florida’s poised for a repeat!
Ron Book, the Julia Tuttle Causeway, the
opposition to halfway housing for registrants, stating
residency laws are backfiring then suggesting the
solution is to increase residency restrictions,
Valigator, & Gov. Crist. But to their credit, Crist
gave a Romeo case a full pardon.”