For a more in-depth look at the topic of teens placed on America’s sex offense registries, read the 2013 Human Rights Watch Report Raised on the Registry: The Irreparable Harm of Placing Children on Sex Offender Registries in the US

“My opinion is this is the best thing that could’ve happened to the kid…It is not vague to say, ‘If you do this kind of activity, we don’t care what age you are, you are liable for prosecution.'” — [Zusha Elinson (Oct. 7, 2013). Federal Youth Case on Trial: Prosecution of 10-Year-Old on Sex Charges Stokes Debate Over Juvenile Justice. WSJ]

In Iowa, a sixteen-year-old boy meets another teen and they date and have sex; turns out the girl was only 13, and the teen finds himself on a sex offender registry [1]. In Oregon, two thirteen year old boys faced 10 years and life on the sex offender registry for participating in “slap butt day,” a common form of horseplay at the school; the district had prosecuted other children for sexual harassment in similar cases [2]. In Florida, two teens were convicted of child porn for taking racy pictures of themselves [3]. The Utah Supreme Court recently ruled on a case in which a 13 year old girl was charged as both victim of a sex crime and a perpetrator for having consensual sex with her 12-year-old boyfriend [4].

These cases are merely the tip of the iceburg in a society obsessed with punishing sex offenders. The criminalization of teenage sexual behavior has become a disturbing trend in our predator panicked society. We are simultaneously obsessed with sex and horrified by sex; our laws reflect this panic. For example, we allow 12-year-olds to obtain birth control and abortions, but they cannot consent to sex [5]. Criminalizing teen sex is part of the “look tough on crime” stance which is popular in today’s society, yet few people are educating the public about the real possibility of teens landing on sex offender registries for irresponsible sexual behavior [6]. Legislators in Georgia failed to pass a bill mandating schools teach the legal consequences of teen sex, though it later passed a “watered-down” version of the bill [7]. This mentality has led to disastrous consequences, destroying the lives of many teenagers by placing them on sex offender registries for life!

The possibility of teens landing on the registry is very real, as teens are having sex without knowledge of the consequences. The Center for Disease Control found in one biannual survey of ninth to twelfth graders that 45.3% of teen girls and 48% of teen boys have had sex. Furthermore, 4.2% of females and 10.4% of males had sex before age 13, and 11.2% of females and 17.5% of males had four or more sex partners [8]. A 2002 National Survey of Family Growth found that of the teens age 15 to 19 who have never had sexual intercourse, 24% of males and 22% of females engaged in oral sex [9]. In short, more than half of teens have experienced sexual contact of some kind. This does not even include actions such as taking naughty photos, butt slapping, or even some innocent actions misinterpreted as sexually motivated conduct.

If you think your child is immune, think again. Children as young as pre-school students have faced severe penalties for “inappropriate sexual behaviors.” The Virginia Department of Education reported in 2007, 255 elementary students were suspended for offensive sexual touching; the Maryland Department of Education reported 166 elementary students were suspended for sexual harassment. These suspensions add a permanent mark on the child’s school records [10]. The AP recently noted from 1993 to 2004, adult sex crimes decreased by 56% but juvenile crimes increased 40% by the same period [11]. However, what percentage of these cases involves forcible rape or child molestation as opposed to consensual sexual activity with peers?

In our quest to prevent sexual violence, we are willing to place marks of infamy on children as young as four in the name of public safety, proclaiming the ironic mantra, “If it saves just one child, then the law is worth it.” Tell me, are we willing to destroy the lives of many children to save “just one child?”

http://www.thenationalcampaign.org/sextech/PDF/SexTech_Summary.pdf — Survey of Teens and Sexting released by the National Campaign to Prevent Teen and Unwanted Pregnancy and Cosmo Girl Magazine. A few of the Key Findings:

How many teens say they have sent/posted nude or seminude pictures or video of themselves?

How many teens are sending or posting sexually suggestive messages?
– 39% of all teens
– 37% of teen girls
– 40% of teen boys
– 48% of teens say they have received such messages

Although most teens and young adults who send sexually suggestive content are sending it to boyfriends / girlfriends, others say they are sending such material to those they want to hook up with or to someone they only know online.

Who are these sexually suggestive messages and images being sent to?

– 71% of teen girls and 67% of teen guys who have sent or posted sexually suggestive content say they have sent/posted this content to a boyfriend/girlfriend.

– 21% of teen girls and 39% of teen boys say they have sent such content to someone they wanted to date or hook up with.

– 15% of teens who have sent or posted nude/seminude images of themselves say they have done so to someone they only knew online.

The Adam Walsh Act allows people as young as 14 on the National Sex Offender Registry; however, the Act creates a “Romeo and Juliet” clause which excludes teens from the registry for consensual sexual acts with individuals within 4 years of age of themselves. Not coincidently, states that have passed the Walsh Act have failed to implement this aspect of the law.

DALLAS MORNING NEWS LIST OF OVER 4,000 TEXAS REGISTRANTS PLACED ON THE REGISTRY AS JUVENILES, SOME AS YOUNG AS AGE 10!
http://www.dallasnews.com/database/2009/sexoffenders.html

First US Court case to strike down prosecution threats over sexting laws. More specifically, the court ruled it is the discretion of the parents, not the courts, to educate teens involved in sexting incidents, and prosecutors cannot force sexting teens to take education classes under pain of felony charges. Miller v. Mitchell, No. 09-2144 [3rd Cir. 2010] http://www.ca3.uscourts.gov/opinarch/092144p.pdf

Round Table Discussion of a 10 year old kid on the public sex offender registry. Perhaps the most disturbin part of the video is the clapping of the audience in approval of environmental attorney Erin Brockovich, who was defending the prosecutor who prosecuted the 10 year old. 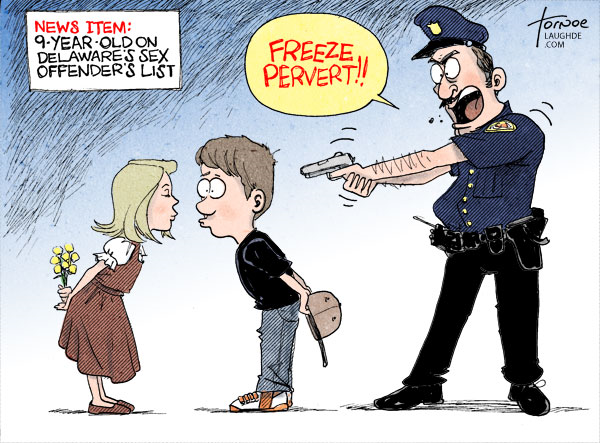