BACKGROUND: Filmed in Cincinnati, the 2017 Sh**take Awards Show is the tenth installment of the annual show lampooning those who exploit Predator Panic for personal gain.

VIDEO: Did you ever think I curse to much? People sometimes complain I do. Well, someone sent Irma the Censorship Nazi to help clean up my Sh**take awards. (Oh, so we’re censoring the description too?) Well, if you ever wanted to see my mouth washed out with soap, you’re in luck. (Special thanks to Gini from SOSEN for helping… Except for the soap part. bleh.)

CHANGES FROM THE 2016 SH**TAKES: This year’s category is the Sh**tpost Signposter of the Year, highlighting the use of signs to harass registered persons. 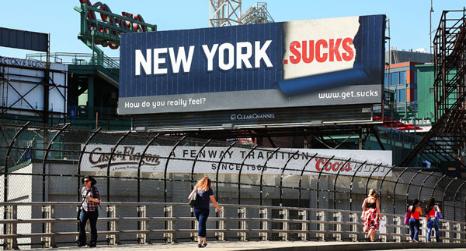 AN ACT to amend the penal law, in relation to prohibiting child SOs from possessing a depiction of any minor during their incarceration. I can see a lot of issues with this bill. If a teen gets locked up on an R&J, he can’t have pics even of his siblings because they are minors? A father can’t have pics of his kids? What about pics of yourself as a kid? Thankfully, it stalled in committee. (45.65% of the vote) 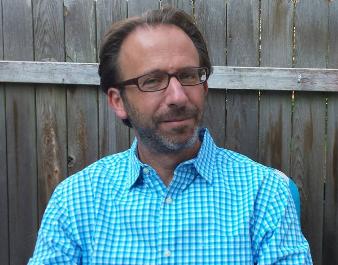 Applauds the fact the US will mark passports like the Nazis and Soviets used to do. “I’m all for the law, for the record. It’s just a shame we need it. Because if it was up to me, anyone convicted of molesting a child would never get a chance to “move into town.” Life imprisonment is fine by me. Heck, you could convince me of the death penalty in certain cases…I don’t care about the rights of these people. I don’t care about the fact they’re forever marked wherever they go. They should be marked. The end.” (45.65% of the vote) 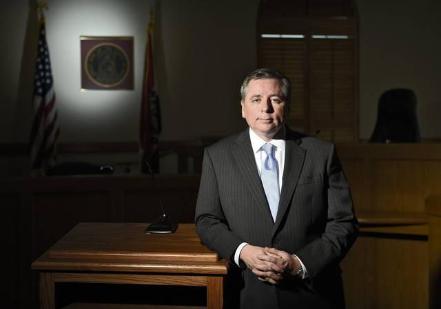 Threatened and intimidated people who wrote letters of support to a man on trial for a sex crime. “Zahnd’s office did something highly unusual: It contacted the people who had written character letters on behalf of Paden and told them to get in touch with assistant prosecutor Chris Seufert. When they did, Seufert told them that, unless they withdrew their letters, he would expose them as supporters of a defendant who had
engaged in pedophilia. Zahnd’s office also subpoenaed the letter writers, ordering them to appear at Paden’s sentencing hearing. But when they showed up, none of
them were called to the witness stand.” (52.17% of the Vote) 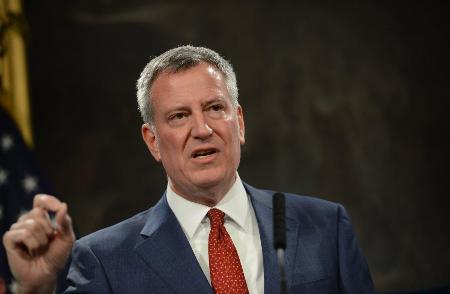 Stole a line from Lauren Book. “State Sen. Jeffrey Klein says a state law designed to keep sex offenders away from schools doesn’t include universal pre-K and kindergarten facilities. Kindergarten and pre-kindergarten programs that exist physically outside of actual school buildings do not receive protection under the law barring convicted sex offenders from living within 1,000 feet. ‘What we found was
astonishing,’ Klein says. ‘These ticking time bombs can attack our kids at any time, and the law unfortunately isn’t there to protect them.’” — (48.94% of the Vote) 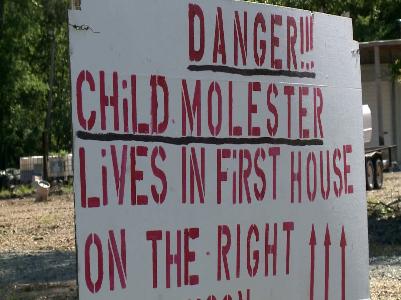 2017 SHITPOST SIGNPOSTER OF THE YEAR
(Special Category for 2017)

Shelton Kitchens said he learned recently that his daughter was in a sexual relationship with a 21-year-old man. “She got lured in by puppies,” he said. “He called Crimes Against Children in Little Rock. They said they can’t do nothing about
it because she’s 16 years old,” he said. In fact, 16 is the age of consent in Arkansas. There was nothing law enforcement officers could do. So he started a public awareness campaign, putting a sign up that reads, “Danger! Child molester lives in first house on the right.” It lists the man’s last name at the bottom.

2017 SHITPOST SIGNPOSTER OF THE YEAR 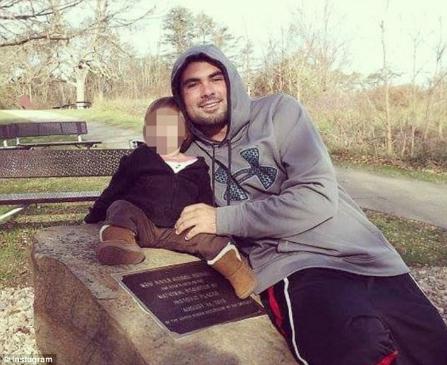 Attacked the man who found his lost daughter, then went online to Facebook and continued his attack online, forcing the good Samaritan to leave town. Like a coward, he shut down his FB page after thousands of folks attacked him online for his
stupidity. 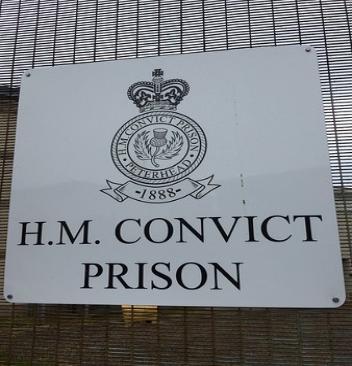 British inmates complain their blankets were made by sex offenders

Inmates at Walton prison fear they could be sleeping under blankets made by SOs. The prisoner describes himself as “horrified” to learn a “sex offender’s hands have been all over my blanket” and questions why they are distributed throughout the prison system. 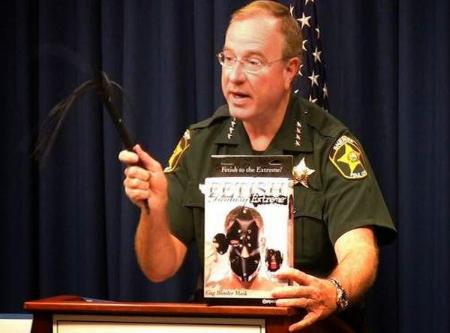 Shady Grady, Sheriff of Polk Co FL: Shady Grady told registrants NOT to seek shelter except for prison during Hurricane Irma and bragged about it on social media. 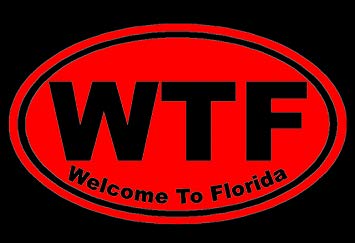 Was there ever any doubt? This is FloriDUH’s fifth title in a row and eighth overall victory. The ongoing registrant crisis in Miami and the Grady Judd hurricane shelter ban helped maintain FloriDUH’s dynasty for another year.

Write-In Candidates (Each received one vote)

It seems Karin Ahrman got the original post removed from my Shiitake Nominees Blog. Well, no matter because it will be reposted here in the interest of the safety of registered persons and others Karin has harassed over the years in Ocala, FL.

The following is a matter of public record and thus is republished here under the Fair Use Doctrine, (See https://www.copyright.gov/fair-use/more-info.html for more information). “Fair use is a legal doctrine that promotes freedom of expression by permitting the unlicensed use of copyright-protected works in certain circumstances. Section 107 of the Copyright Act provides the statutory framework for determining whether something is a fair use and identifies certain types of uses—such as criticism, comment, news reporting, teaching, scholarship, and research—as examples of activities that may qualify as fair use.” The Shiitake Awards serves both as a news reporting blog and a colorful criticism. This will NOT be taken down for ANY reason.

“I nailed them on every telephone pole in the neighborhood,” Ahrman said. “I was molested at 4. I was raped at 12. You don’t get over it. Someone has to be here and be the voice for the voiceless.” The Marion County Sheriff’s Office handles sex offender
registration for the county. There’s nothing illegal about the sign, but Deputy Paul Bloom said Ahrman could still end up in legal trouble if something goes wrong. “If this person, this sex offender was attacked and that person was determined that they attacked him because they heard that they were a sex offender, certainly there’s going to be some civil liability there,” Bloom said.

Then Karin Ahrman took her act to the A&E Cable TV station, where they published a Q&A :

When you put the sign out in your front yard, what kind of reaction did you get?

That was kind of mixed. And I had to fight my husband about it. I literally told him, ‘We will divorce over this sign. The sign will stay here.’ I was molested when I was four. I was raped when I was 12, so this is personal to me.

We have [the offender’s] picture on the sign. And I only put what was public knowledge on it. People tried getting me to take it down. They called the police. And [the police] all said that it’s perfectly legal. It’s no different from me putting up a political sign, a religious sign or whatever, because it’s my property. It was the facts that were put in my mailbox. It was public knowledge.

On the National Sex Offender Public Registry website there is a disclaimer that says, ‘Any person who uses information contained in…this Website to threaten, intimidate, or harass any individual, including registrants or family members, or who otherwise misuses this information may be subject to criminal prosecution or civil liability under federal and/or state law.’ Did anyone claim that you were harassing the guy?

Somebody did say, ‘You know, you could be charged with harassment.’ And I said, ‘How am I harassing him? I’m not going to his house. I’m not threatening him. I’m not speaking to him. I’m not interacting with him.’ He did come here to interact with me once, and I told him the facts. ‘It’s my driveway. Do not stop here. Do not call here.’

Did he say why he came to talk to you?

At first, I had 100 flyers printed up and I put them on every telephone pole between my house and all of the schools, and he was right behind me ripping them down. He stopped and asked, ‘Why are you doing this?’ And I said, ‘Because they need to know about you. Go ahead and tear the flyers down, because the next sign is going to be even bigger.’ That’s when I put my yard sign up. I bet he’s wishing he would have left up the little flyers with his picture on them. They were so small, you could barely see it. Now his face is all over.

Do you plan on doing anything else to spread the word?

There’s really not much else I can do, because then I would be charged with harassment. I did have some professionals contact me that wanted me to get a crowd together so they could do a free presentation for kids to teach them a few things [about safety] when dealing with strangers]. [Unfortunately] I couldn’t even round up a class of 30.

Did your neighbors complain that you were bringing down their property value and things like that?

Did you look on the NSOPR website to see how many other convicted sexual offenders were within a radius of your house? [Editor’s note: You can do this in Florida, but information is not available for every state.]

I didn’t. It’s not like I want to cause a problem for everyone. I want my son to be very aware. He’s autistic on top of being [the offender’s] target age. He’s not street smart and he’s been very protected. He’s watched very closely, but not all kids are that lucky. I was one of those kids that wasn’t that lucky. I suffered [sexual abuse] twice for that. So, if I can save one child—just one—from that, then it’s worth whatever the neighborhood wants to throw at me.

This is what I originally posted on the Shiitake Awards blog in 2017:

This is Karin Phillips Ahrman [FACEBOOK] [YOUTUBE] of Marion County, FloriDUH. This disturbing trend of private citizens harassing registered persons with signs. Cops don’t want to arrest this crazy bitch even though this is harassment, but at least they said she can be sued. I hope Karin’s VICTIM sues her into oblivion.

Interestingly, she doesn’t like it when someone goes after her, so why do it to others?

Below are various pictures taken from vaious sources illustrating Karin Ahrman and her vigilante actions. All are legal under Fair Use: 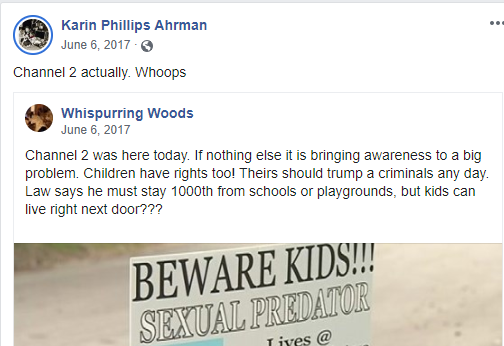 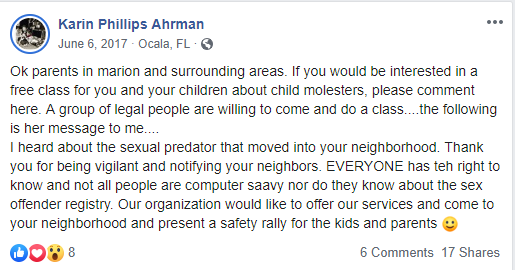 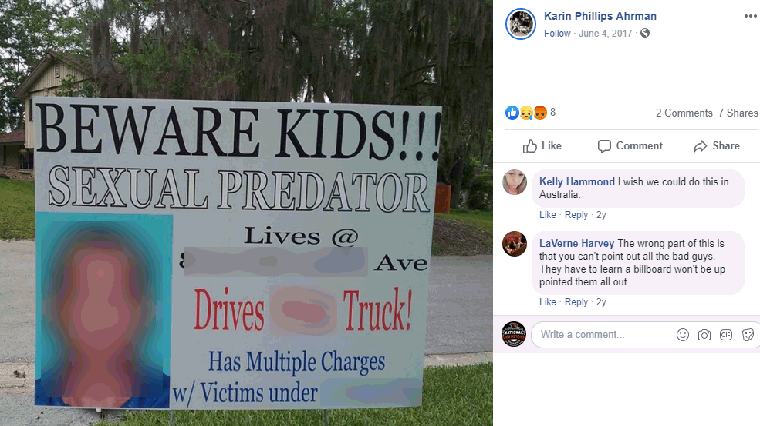 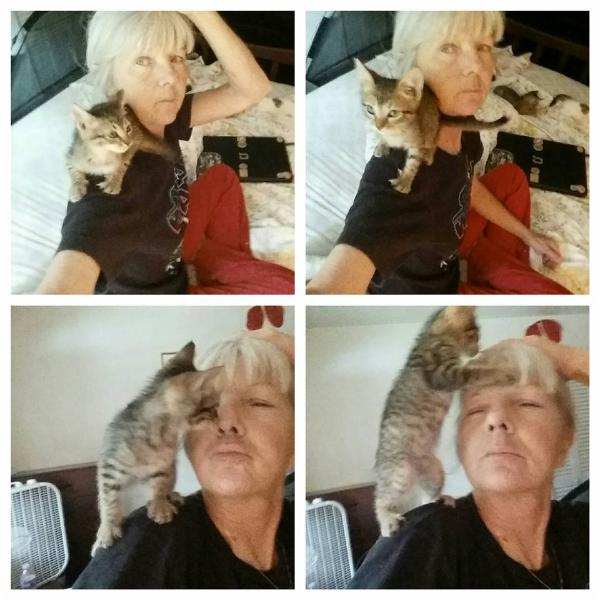 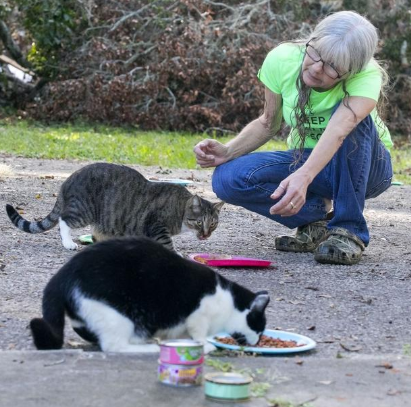 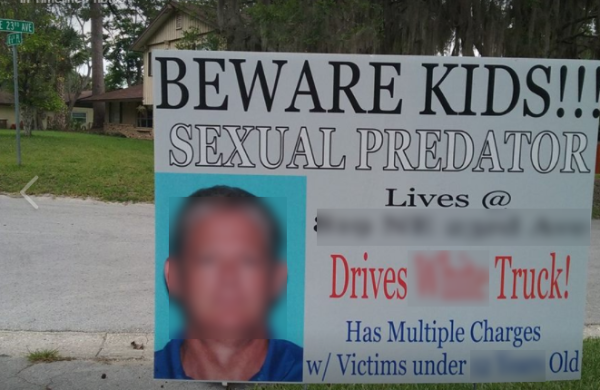